The Resolving star and planet formation with ALMA (REALM) project was initiated in 2015. Initially, we observed carbon monoxide (CO) in the young TMC1A protostellar system at the highest possible spatial resolution with ALMA. The obtained images showed CO and dust on spatial scales of only 6 au and revealed the presence of a disk wind. The REALM project is now being continued with the support from the Swedish research council and in 2017, we continued the long baseline observations with ALMA. 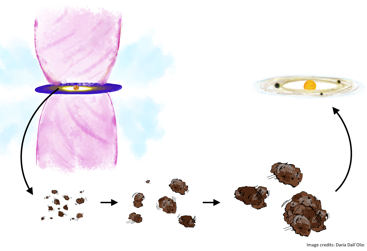 A European team of astronomers has discovered that dust particles around a star already coagulate before the star is fully grown. Dust particle growth is the first step in the formation of planets. The researchers from the Netherlands, Sweden and Denmark publish their findings in Nature Astronomy. 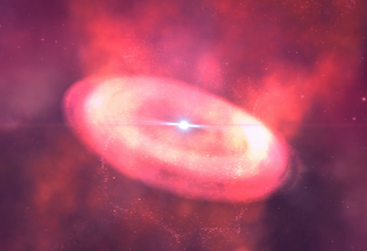 Researchers from the Niels Bohr Institute have used the ALMA telescopes to observe the early stages in the formation of a new solar system. For the first time they have seen how a powerful whirlwind shoot out from the rotating disc of gas and dust surrounding the young star. The results have been published in the prestigious scientific journal, Nature. 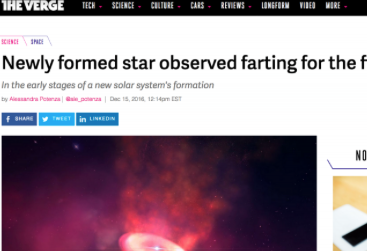 For the first time, scientists have observed the powerful whirlwinds shooting out of a newly formed star located 450 light years away. The space outbursts occured in the early stages of a new solar system's formation, when young stars are known to emanate jets of gas.

Resolved molecular line observations reveal an inherited molecular layer in the young disk around TMC1A
Kinematics around the B335 protostar down to au scales
Evidence for the start of planet formation in a young circumstellar disk
A necessary first step towards planet formation is the growth of dust grains. Such growth has previously been inferred towards mature protoplanetary systems (older than 2 million years), but not towards young systems where disks are massive enough to allow for the formation of giant planets. In this publication we report a lack of emission of carbon monoxide isotopologues within 15 au of the very young disk surrounding TMC1A. We conclude that shielding by millimeter sized grains is responsible for the lack of emission. This shows that grain growth starts early in the star formation process. Daniel Harsono, Per Bjerkeli, et al., Nature Astronomy, 2018
Resolved images of a protostellar outflow launched by an extended disk wind
Assorted scenarios have been proposed to explain protostellar outflows; the main difference between these models is the region where acceleration of material takes place. These data show that gas is ejected from a region extending up to a radial distance of 25 astronomical units from the central protostar, and that angular momentum is removed from an extended region of the disk. This demonstrates that the outflowing gas is launched by an extended disk wind. Per Bjerkeli, Matthijs H. D. van der Wiel et al., Nature, 2016

Per Bjerkeli © 2017. All Rights Reserved.
Premium Template by WowThemesNet